YS groupie” of sorts ever since! After years of photographing his daughters performing arts career, Michael’s interest in dance photography sparked after viewing a colleague’s work. Lucky for Michael, his job at AT&T gave him a connection with the dance world through his companionship with SIDEWAYS company member, Jeremy Williamson. Jeremy entertained Michael’s new found passion and invited him to rehearsal. “I was so overwhelmed by the dedication, the athleticism and the beauty that I was immediately hooked”, says Boatright on his first experience with SIDEWAYS during rehearsals for Blackout in 2012.

Five years have gone by and you can still find Michael in the theater with SIDEWAYS for all rehearsals and every single show. Why stick around? Michael shows endless gratitude for his time spent working with S 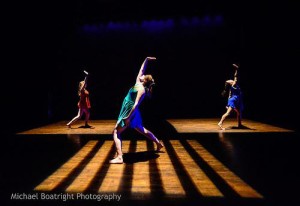 IDEWAYS. He credits the company for the transformation of himself and his photography. He loves the company’s enthusiasm and light-hearted spirit despite their gripping emotion when it comes to tackling a performance with deep and complex themes.

While Michael has never been a performer himself, there have surely been many amusing memories working with performers over the years. It was a typical afternoon shooting with the dancers in the studio when Michael realized he happened to be the only one in the building with shoes on. This being a normal occurrence in a dance studio, Michael couldn’t settle for being left out of the fun and kicked off his shoes to join the barefoot bunch! “In that moment, I felt like something changed-that instead of being an outsider-a voyeur, just taking photos -I became part of the creative process.” So if you were concerned by the barefoot man running around at this past weekend’s show, it’s just Michael who has been committed to taking pictures without shoes on ever since that day!

Michael has been alongside SIDEWAYS as it has grown and is overwhelmed with joy when speaking about the involvement with the Foster-Schmidt Dance Academy for Down syndrome. He is emotional about his encounters with these students. He fondly remembers their excitement shortly before leaving for last summer’s trip to Disney World. Michael was thrilled to be just a part of the reason for their smiles after capturing their “WE’RE GOING TO DISNEY” photo. “Foster-Schmidt has made such an impact on these dancers, it is truly marvelous and watching it happen touches the heart-that spark of the Devine –that shows us all what is real and what really matters in life.”

Michael Boatright has been a whole-hearted SIDEWAYS supporter from the very start. We truly could not be where we are today without his relentless dedication and appreciation for our art form and our mission. We were so happy to share our ten-year anniversary celebration with him this past weekend and cannot wait to see the incredible work he creates for our dancers from the performances! Thank you for everything Michael!

« Dancer Spotlight: Andrea Ekmark
Saving the world, one story at a time »